Shot Tower: The War Between the States is near eruption in 1860. Young Harrison Cormack, son of Irish immigrants, returns from a wander through Philadelphia to his home in Southwark to find his mother has been murdered. He becomes obsessed with finding her killer.

Harry meets Silas Breed in the shadow of the Shot Tower, a riverfront landmark. They’re recruited as scouts for the first United States intelligence service. They find romance, Harry with Linnéa before departure and Silas with Acacia during the adventure.

The friends search for the killer when they steam south as crew in the massive fleet that conducts the first major Northern naval action of the Civil War, the initial move in the Blockade of Southern ports.

They observe the fleet enter Port Royal Sound and witness the assault, known to locals afterwards as The Big Shoot.

Shot Tower is a history-mystery, a historical fiction with heart.

It’s Book One of the Harry and Silas Series. 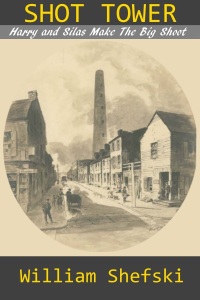